Get ready, folks!
Predecessor’s first major update of 2023 is nearly here and with it comes some epic changes! We’re set to launch patch v0.3 this Tuesday, January 24th and we're thrilled to share ahead of time everything you can expect to find in it.

One of our main focuses for this patch is to empower Mages. We want to make them feel stronger before they even get their first item, without changing their late game power. The goal here is to make playing Mages more impactful and rewarding, especially in the early game.

But that's not all! We've got some great new game improvements coming your way with two new post-match screens and some weekly leaderboards for you to sink your teeth into. Let’s not also overlook the bounty hunter in the room - Revenant is finally here!

Speaking of additions, we've also slipped in a new mouse sensitivity setting, so be sure to tweak this to your liking ahead of your next game.

But wait, there’s more! We're already hard at work on Patch 0.4, where we'll be making changes to ADC itemization as well as improving ranged auto attacks. Plus you'll be thrilled to hear that we're also working on adding our AI game mode! But more on that closer to the time.

Last but not least we are looking to make our update schedule more consistent. Going forwards we’re aiming to deliver patches every two weeks, alternating between Balance Patches and our bigger Content Patches. This cadence might still change, but for now our goal is to ensure a steady flow of content and improvements that you can more easily predict and plan around.

This is just the beginning of what's to come in 2023. We can't wait for you to see what we have in store and to hear your feedback! Get ready for an exciting year of updates and improvements!
- Bloodmordius, Senior Game Designer

Check out the video overview for Patch v0.3 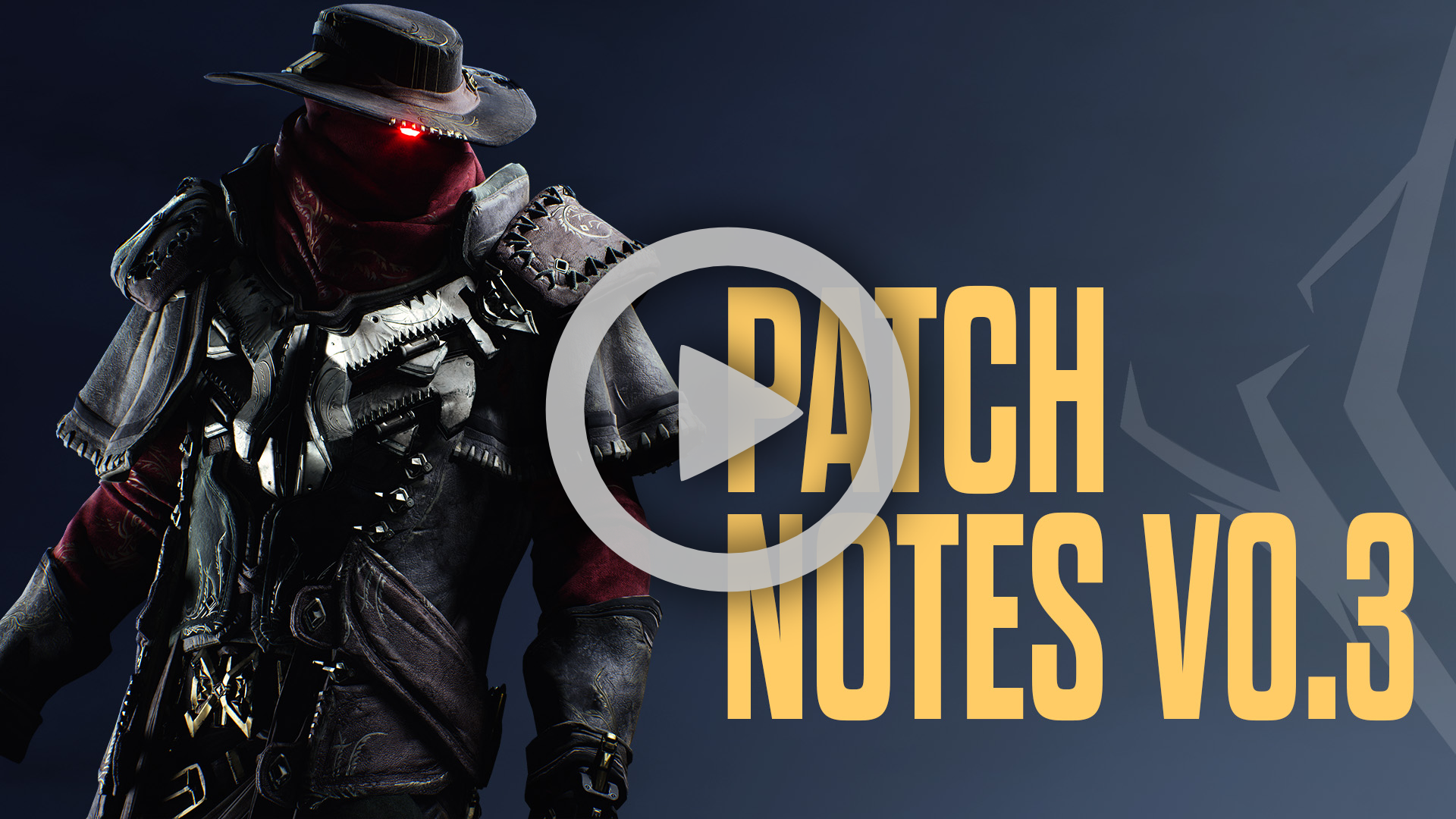 The ritual has been performed. The payment has been taken. The fearsome bounty hunter has been awoken, determined to pursue and punish those responsible for the destruction of his homeland. 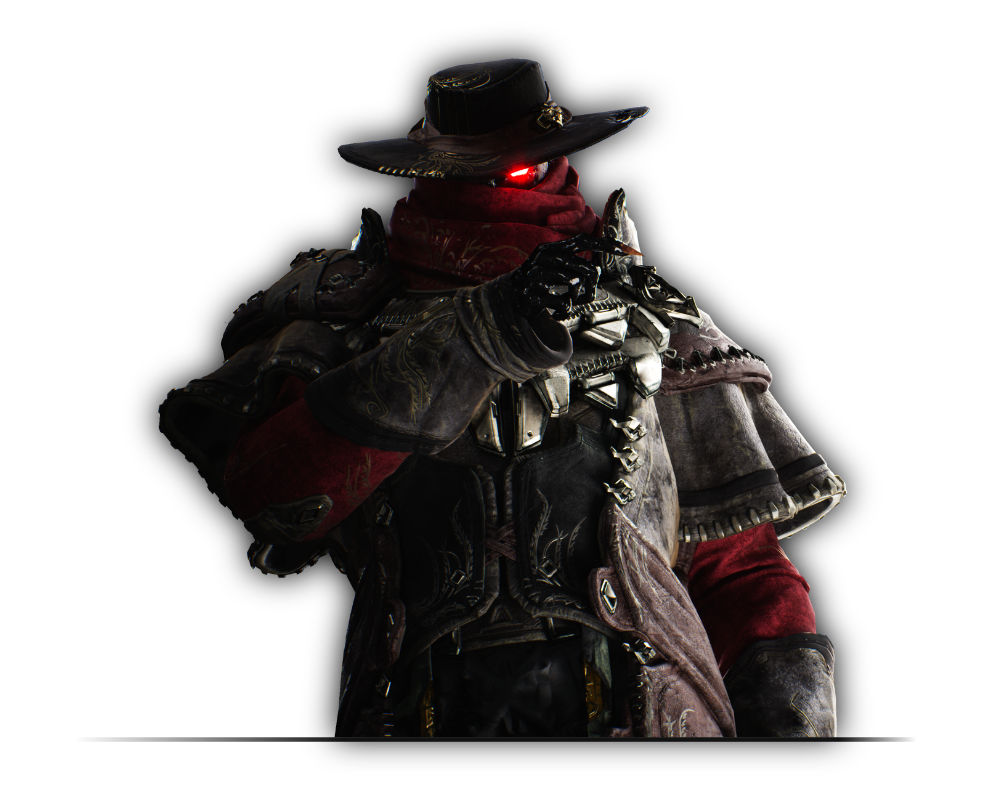 REVENANT ABILITIES:
Passive: Bounty Hunter
Revenant starts with a rank in Hellfire Rounds. He does not shoot faster with Attack Speed but does gain 5% (+1.5% per level)(+0.1% per 1% Critical Strike Chance) increased Total Physical Power. When Revenant kills an enemy Hero he will gain 50 (+25 per Bounty stack) additional gold.

Ultimate Ability [R]: Reckoning
CD: 140/120/100
Cost: 100
Effect: Revenant pulls himself and his target into the Nether Realm for 6/7/8 seconds, rooting the target for 0.5 seconds. Killing his opponent inside the Nether Realm will double the bonus gold gained from Bounty Hunter.

Profile Tab & Early Access Icons
Early access icons are here! You’ll notice that there is a new Profile tab on the top bar of the main menu - this is where you can change and display your profile icon, with the initial selection available to you depending on which Early Access Bundle you have. You might even spot a sneak peek at some profile-related customization features that are coming in future updates! 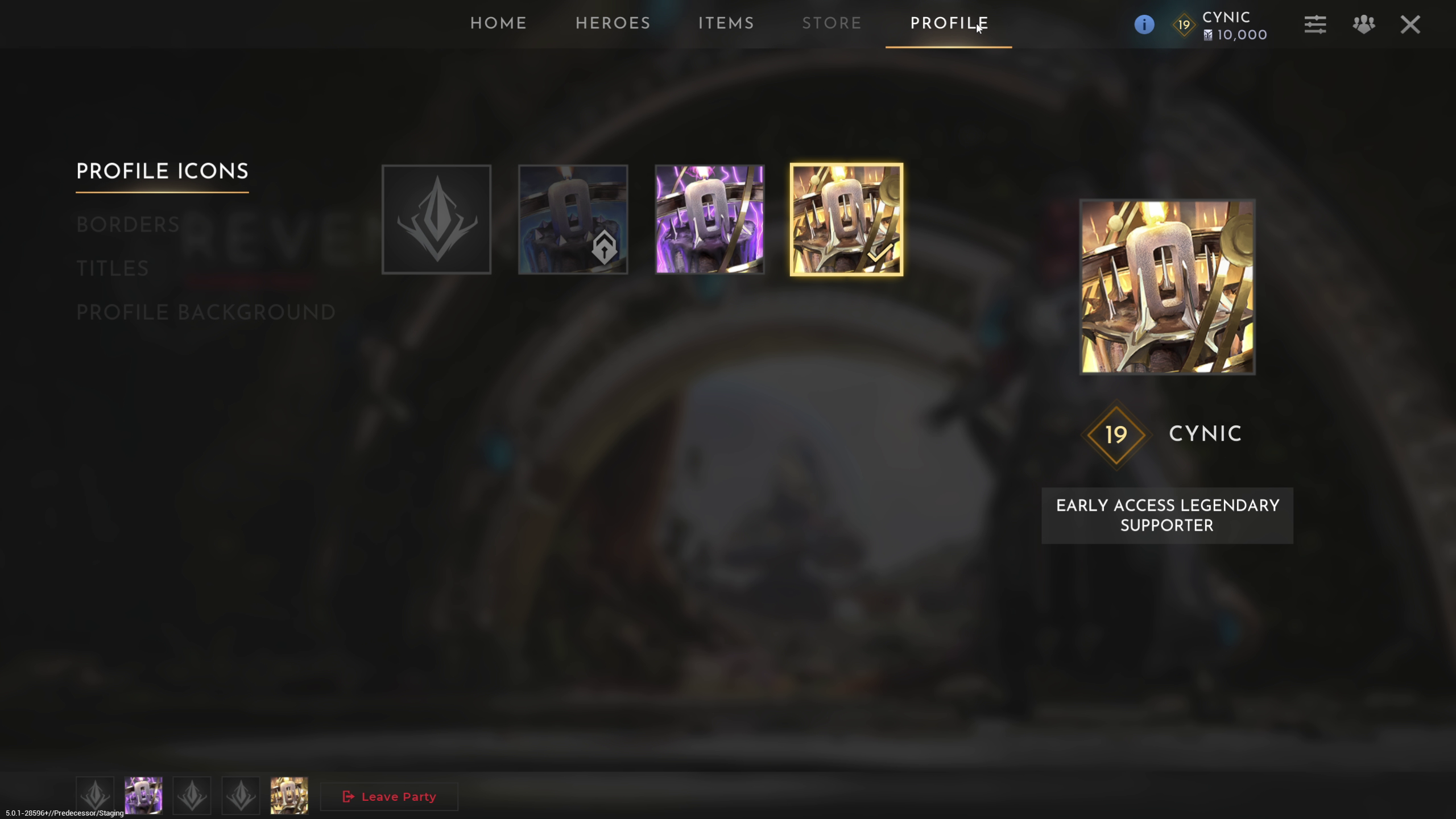 Before we only accounted for a Hero's kill streak in the bounty system. Now these enemy Heroes will also increase this same bounty through the amount of creep score (cs) they have relative to your team. This will allow us to reward players that are significantly behind in economy from multiple sources to come back into the game through enemy misplays.

New Post Match Screens
We’re adding two post-match screens in this update. The first is a screen that will allow you to add players after a match; why not start grouping up with teammates that you enjoyed playing with after a great game? The other new screen is a post-match statistics screen, allowing you to dive deeper into those juicy statistics from your last match. 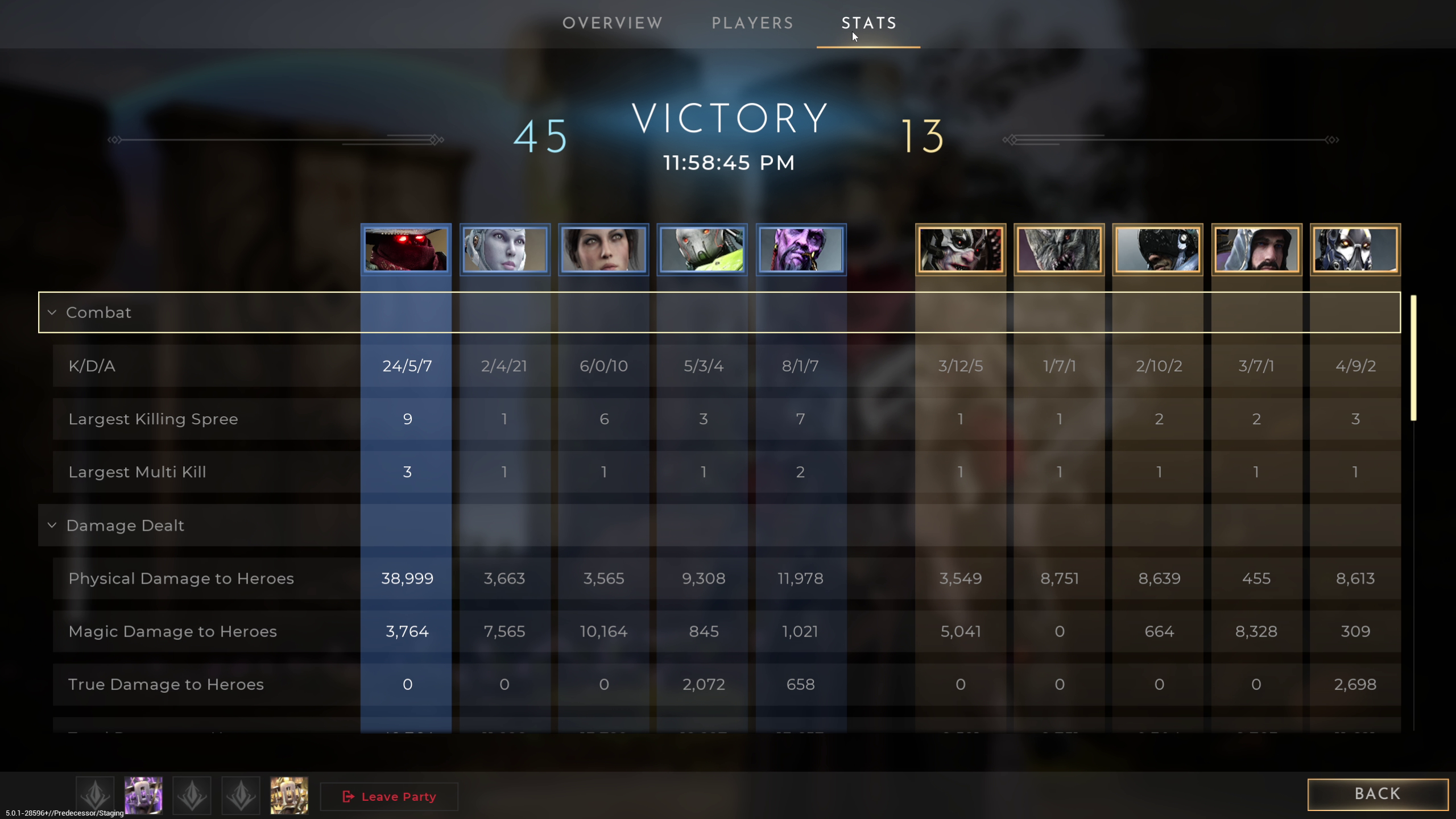 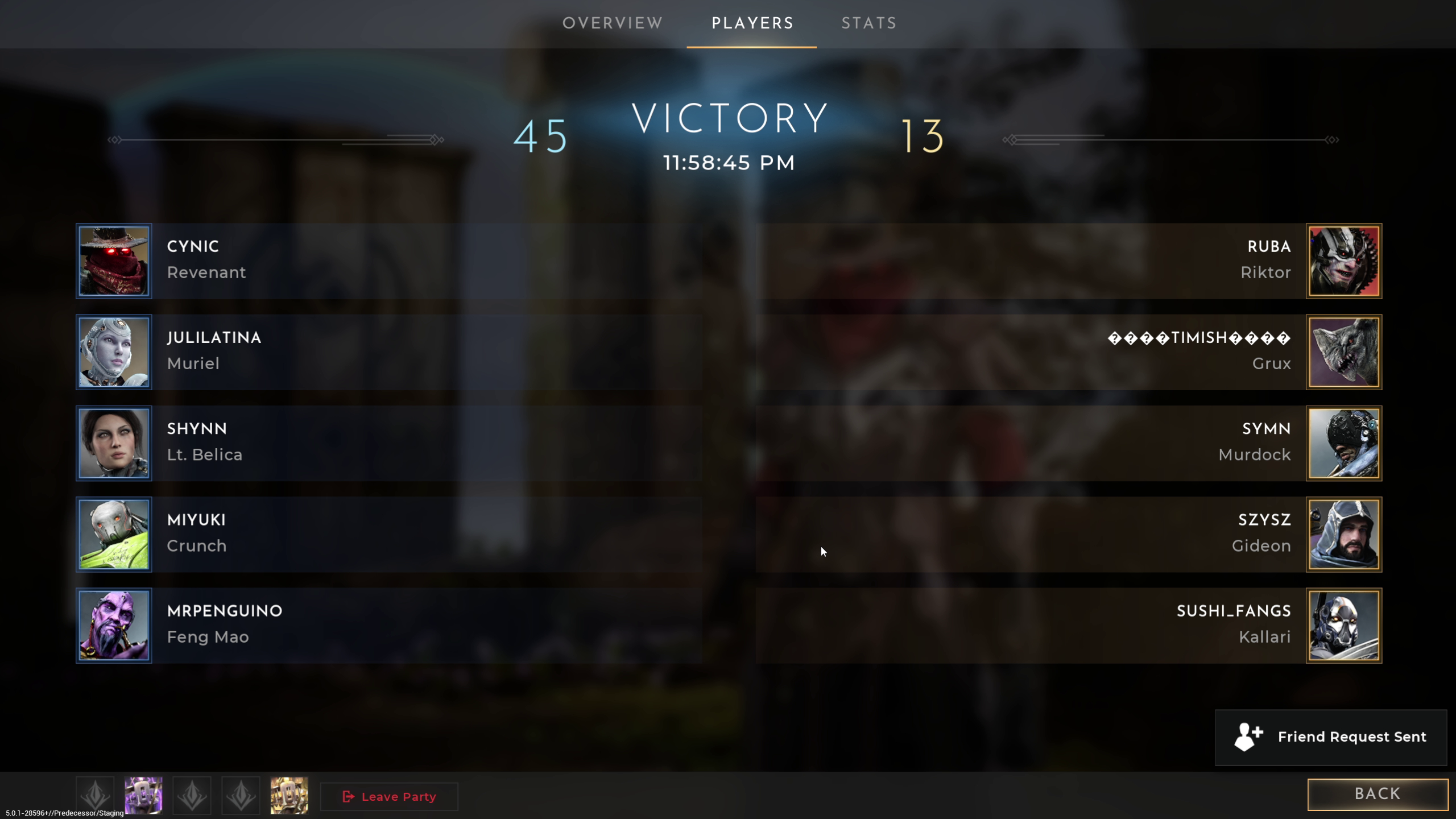 Weekly Leaderboards
Each week we’ll be sharing a leaderboard showcasing the top 100 players! Initially, this will be shared on social media, but as we continue to develop the feature we plan to integrate it directly into the game so that players can easily compare their rankings with others. To qualify for the leaderboard, players must complete a minimum of 10 games per week.

End of Match Survey
We are adding a short survey at the end of a match that will require you to give us some feedback on your previous game. This data will help us monitor overall and individual community responses to matches on a daily basis, something that will help us to understand what’s going well as well as what we can improve. We appreciate you taking the time to fill it out. 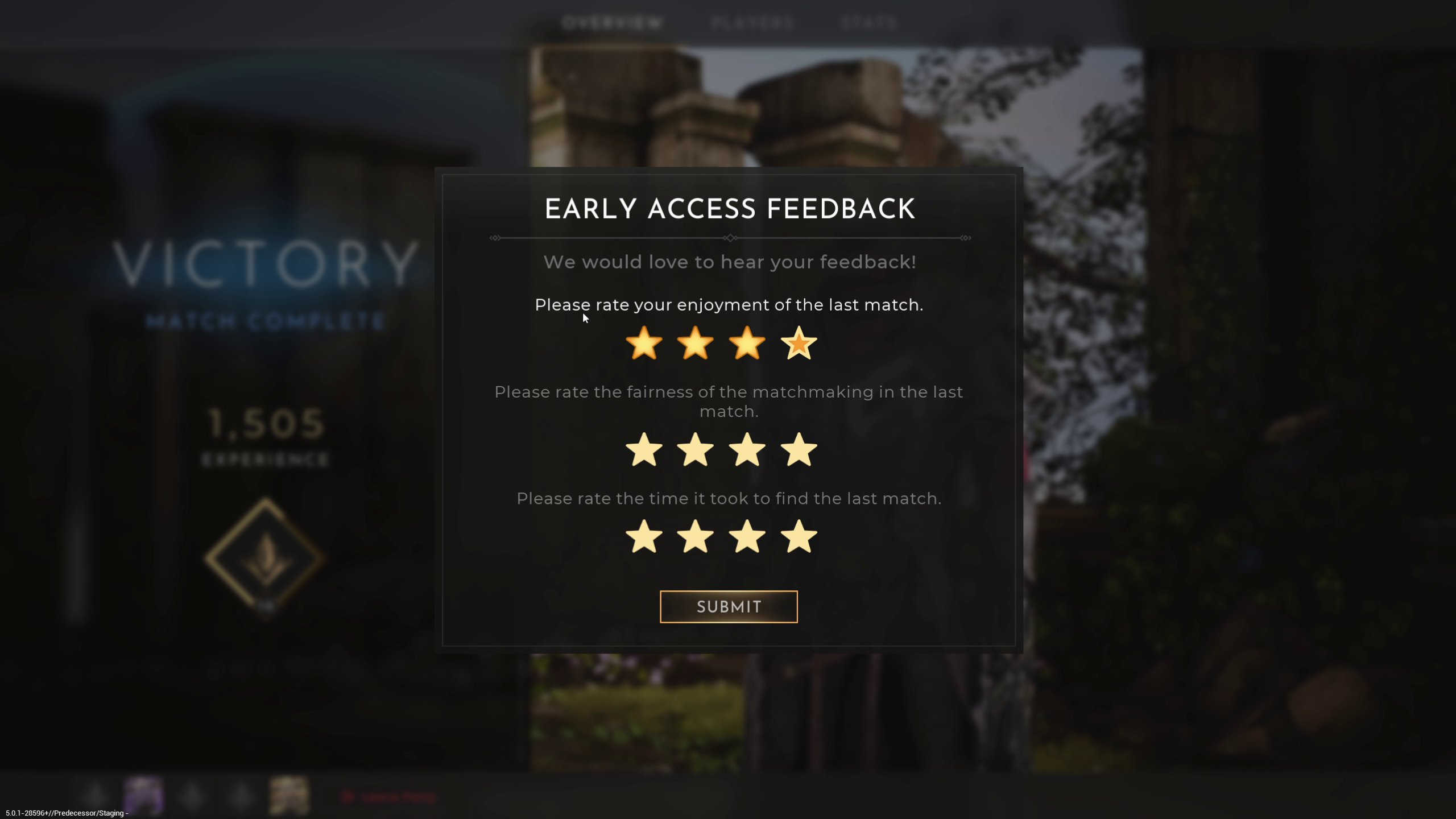 Matchmaking Improvements & Bug Fixes
Since Predecessor launched we have been monitoring the matchmaking system closely and have identified multiple bugs that we believe have impacted match quality. This patch brings a number of fixes to these issues and we hope you’ll see an improvement to match quality as a result.

This patch also introduces one of our first improvements to our matchmaking system, the Party Modifier. Now, when queuing up in a group, the MMR of everyone in the party will be inflated based on the size of the party to compensate for the increased coordination and resulting win chance that parties typically have.

Penalty system improvements
Also in this patch we’re making improvements to our penalty systems. First we are separating auto-banning for dodging a queue and going AFK in game, allowing us to be harsher with the scaling bans for players that go AFK in game. Secondly we now have the ability to ban players from chat, one step among several that we’re taking to tackle in-game toxicity. We are continuing to improve these systems over time so expect to see more updates in the future.

Combating Toxicity - Chat Moderation Update
Combating toxicity and improving chat quality is something incredibly important to us. With this in mind (and in line with your feedback) we're taking steps to improve chat moderation beginning this patch.

Part of these improvements is the implementation of a new moderation tool. This tool will not only help us to better monitor chat logs and track disruptive users, but also impose snowballing sanctions based on repeat offences. This system will take time to implement and iterate on, and we'll be actively improving it as we go using benchmarks and player feedback.

Additionally we're also reviewing the Predecessor EULA alongside a brand new Code of Conduct that we hope to share soon; a set of community guidelines that will not only lay out the core pillars that guide our own thinking but also what we expect from our players, expectations that you can reference and that we can use to guide disciplinary measures. Like our in-game features and systems, we look forward to working with our community to iterate and build on these guidelines to help deliver a sustainable, healthy and enjoyable community and gameplay experience for all.

We value and appreciate your continued patience and support while we work to make Predecessor the best experience it can be, each and every time you log in.

OTHER IMPROVEMENTS
● Updated the decal for Murdock’s Static Trap.
● Added missing sound effects to the allied core for when it is under attack.
● Updated Dekker’s sound effects for her basic attacks, Rocket Boots, footsteps, and Stasis Bomb.
● Changed the visual effects for when a player dies.
● Added Hero names next to their portraits in draft and in collections.
● Updated Khaimera’s basic attack sound effects.
● Added a reject button to the match found prompt.
● Updated the desktop icon for Predecessor when installed via the Epic Games Store.
● Added a new sensitivity setting called (ADS).
● Countess Audio improvements
● Updated controller keybindings in the settings menu.
● Controller support now includes scrolling with Left and Right Triggers when using the virtual cursor.
● Party Overview has moved to the left of the screen. This is in preparation of a larger UI overhaul we are currently working on, but more on that another day!

Crunch is currently in a decent spot balance wise. We’re looking to make his sustain only apply from Hero combat to help address some abuse cases that can still happen.
Re-Crunch [R]:
● Passive Healing no longer benefits from damaging minions.

Once again considering our general goals for mages, we’re looking to increase Gideons base damage and shift it away from his scalings. This should help make his early to mid game feel a little more impactful as well as decrease his reliance on magical power. We also hope that these changes open up more build paths for him, allowing players to feel more comfortable dipping into magical bruiser items to enable those big black hole moments.
Cosmic Rift [Q]:
● Base Damage increased from 90/145/200/355/310 to 100/160/220/280/340.
● Scaling decreased from 70% to 65%.
Void Breach [RMB]:
● Scaling decreased from 60% to 55%.
● Cooldown decreased from 9s to 9/8.5/8/7.5/7s.

Howitzer's overall zoning potential has been very oppressive, especially combined with his ability to nuke out individual targets. We’re keeping his Slow Grenade damage relative but decreasing the amount of Grenades placed so that players can more easily navigate around or through them.
R2000 Missile [Q]:
● Decreased R2000 Missile Delay after firing by 0.2s.
Slow Grenades [RMB] :
● Total amount decreased from 16 to 11.
● Grenades now have a tighter formation.
● Base Damage increased from 5/10/15/20/25 to 6/12/18/24/30.
● Scaling increased from 4% to 6%.

Alchemical Rod was stacking far too fast and most players would have it fully stacked before even finishing Azure Core. We’re slowing it down a bit so that it needs to scale into a 2 item spike rather than being too strong as a 1 item spike.
Font [Passive]:
● Mana per stack decreased from 8 to 4.

This Bloodlust shared its name with Grux’s Passive, meaning it was overdue for a rebrand. Players should now be able to better understand which they’re talking about.
● Item renamed to Bloodletter.

This does indeed stack with Vanquisher. We’re changing this passive name so that players who came from games where unique passive names exist can better understand this interaction.
● Passive renamed to Arcane Strength (from Arcane Power).

As previously mentioned, we’re looking to open up build options for first buys to all mages.
Font [Passive]:
● Mana per stack decreased from 8 to 4.

Combustion has been overshadowed by other first-buy items due to its inability to keep a mage in lane. We’re giving it a little more mana to help players feel a little more comfortable in picking it up first.
● Mana increased from 200 to 300.

We’re looking to shift some of Golems Gift’s power into its Haste, over raw power and armor. This should help it feel better as a more utility driven item in the final couple of slots for mages.
● Magical power decreased from 70 to 60.
● Ability Haste increased from 10 to 20.
● Passive renamed from Artillery Golem to Stone Skin.
Stone Skin [Passive]:
● Total Magical Power and Physical Armor decreased from 40 to 30.
● Stacks lost per physical damage instance received decreased from 10 to 6.

Oblivion Crown was a bit too catch-all in its previous capstone form. It also had no downtime as a spike and so we’re transitioning it to still be a strong general use item, but with a burst damage focused niche. The item should now find a more specialised niche for heroes like Fey and Belica who look to blow a target up quickly during particular windows of opportunity.
● Annihilate magical power bonus decreased from 35% to 15%.
New Passive:
● Oblivion: Your next instance of ability damage against an Enemy Hero will deal an additional 8% of their current health as magic damage and increase their magical damage taken by 10% for 3s - 30s CD.

Most Tainted Items tend to naturally scale or have a scaling of some form that makes them generally applicable across a game. Scepter, as true damage, does somewhat naturally scale, but this scaling is fairly minimal relative to others. We’re adding a small magical power scaling to rectify this.
● Malice Base Damage per stack decreased from 6 to 5.
● Malice 1% magical power per stack Scaling added.

Keeping our anti-heal item names to a theme!
● Item Renamed to Tainted Bastion.